Today we have an exclusive interview with Crystal Palace's midfield maestro Alex Marrow. 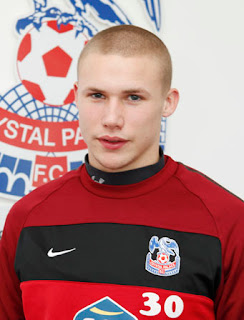 Who is your footballing idol and why?
Roy Keane is my idol because he played the same position as me. He was so professional on and off the pitch, he would also give 100% whenever he played. Just one i watched as a child really.


Is there a football team that your family have supported for generations?
Yes, well being from Manchester i've always supported Manchester United.


How have things changed since Dougie Freedman has been incharge?
The team is a lot closer, were all working harder together as a team. He is trying to get his ideas across, they have been working with the recent results; it's going well.


If you weren't a footballer what job would you do?
I'm not to sure, probably something in sport.


How do rate the palace fans compared to other teams you've played for?
Palace fans are the best i've played for, i've only been at Oldham before but home and away they seem great.


What team would you like to play against most in the Premier League?
Manchester United at Old Trafford.


Why do you love football?
It's good coming into work everyday, enjoying it, just playing football as well. But on Saturday going home from the game with 3 points there's nothing better, and having a good game.

If you could live anywhere in the world where would you live?
Manchester.


If you could go on I'm a celebrity get me out of here would you?
Yes.


What is your favourite car brand?
Audi.


What do you eat before a game?
Pasta.


What is your favourite movie?
The fighter with Mark Wahlberg, he played a boxer, it was out recently.


What is the best goal you've ever seen?
Ryan Giggs' solo effort in the FA cup semi final for Manchester United vs Arsenal in April 1999.


And finally, what is your perfect XI?

Ronaldinho a former Barcelona great.
Picture courtesy of www.flamengo.com.br
Posted by The Captains Armband at 16:41 No comments:

In the first issue of Weekly Touch Count we reveal how many touches Chelsea debutants Fernando Torres and David Luiz had against Liverpool and also featuring the ultimate trickstar Cristiano Ronaldo.

This picture is courtesy of www.chelseafc.com
Fernando Torres (Right), Jamie Carragher (Left)
On his debut against his ex-team Fernando Torres only played for 65 minutes and 39 seconds whilst managing 51 touches and 2 shots; neither of these were on target.
David Luiz came on at 72 minutes and 4 seconds also making his debut for Chelsea, in the 22 minutes and 25 seconds he made 49 touches, 2 blocks and won 1 foul for his team, considerably better than Fernando Torres.

This picture is courtesy of www.chelseafc.com

And finally Cristiano Ronaldo played 93 minutes and 2 seconds having 188 touches (approximately 2 touches a minute), taking 11 shots, 5 on target, 6 off target and winning 2 free kicks. This game was Real Sociedad vs. Real Madrid, as Ronaldo and his team saw Sociedad off by winning 4-1.


Posted by The Captains Armband at 00:00 No comments:

It was a massive occasion today at Old Trafford. Manchester United vs Manchester City. It could be described as one of the most important Manchester derbies in history. In the 77th minute it was 1-1 after Nani placed the ball with his left foot into the corner of Joe Hart's net in the 41st minute. Then in the 65th minute Edin Dzeko had a shot deflected from around 12 yards out, it then hit David Silva and went the opposite way to the direction of Dzeko's shot into the back of Edwin Van Der Sar's net.

But then Wayne Rooney, the man for the occasion scored what is probably the goal of the season and some would say one of the best goals in Premier League history.

Nani whipped in a ball from the right hand side, the ball was behind Rooney and he tried the spectacular, an overhead kick volley into the top corner.

This picture is courtesy of www.manutd.com
Posted by The Captains Armband at 23:25 No comments:


Did you know: He started his career of a Tottenham Hotspur.

Posted by The Captains Armband at 15:35 No comments: